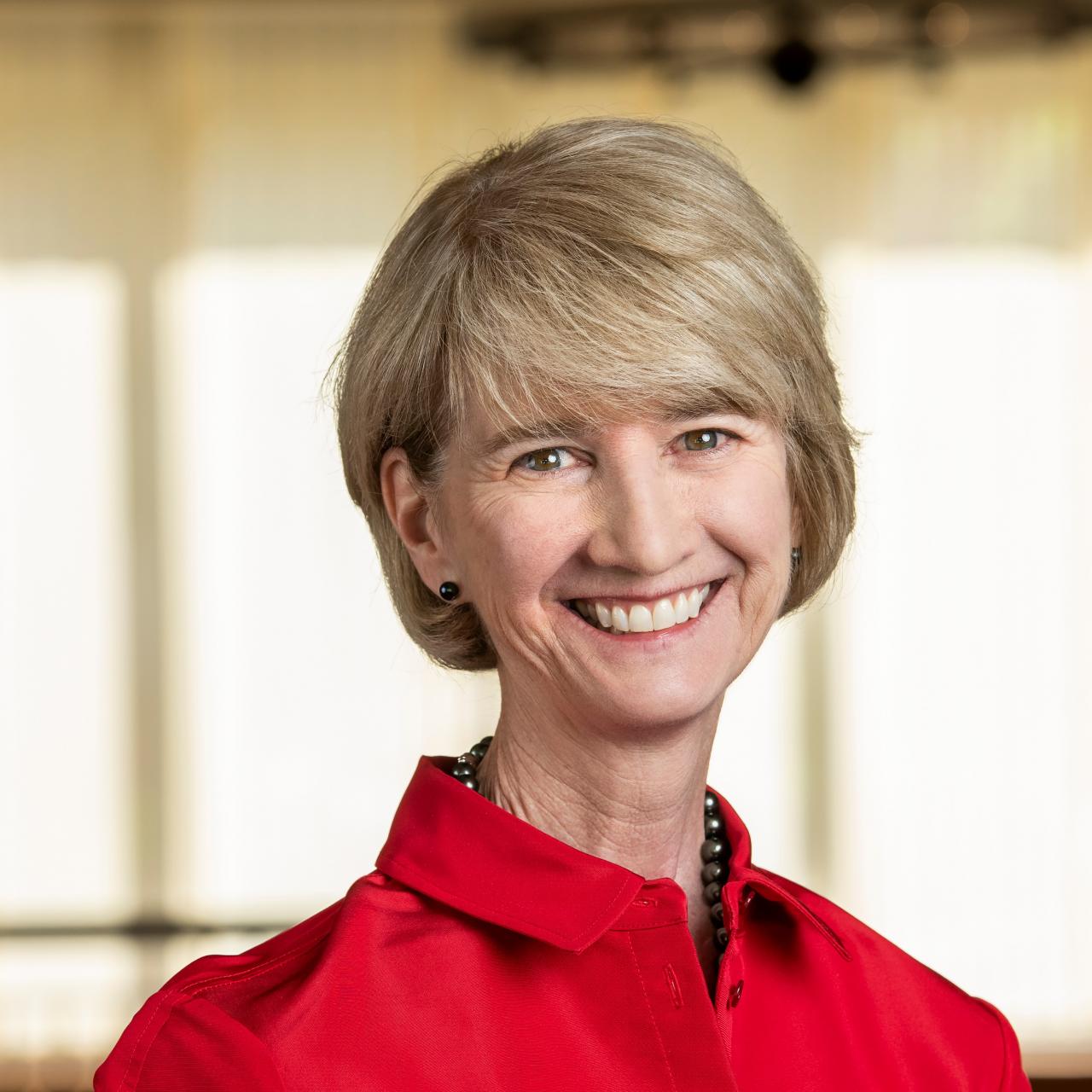 Dr. Kristina M. Johnson is the 16th president of The Ohio State University.

The Ohio State Board of Trustees announced her appointment to the university community on June 3. Dr. Johnson brings to Ohio State more than 30 years of experience and leadership in the academic, business and public policy sectors.

Dr. Johnson has close family ties to Ohio State and Ohio. Her grandfather graduated from Ohio State in 1896, played right guard on one of the early football teams and was a member of the Tesla Club. Family lore has it that Dr. Johnson’s grandfather met her grandmother on the Columbus campus. Dr. Johnson has deep family roots in Ohio.

She has served as chancellor of the State University of New York (SUNY) since 2017. Prior to that, she founded and served as CEO of several successful science and technology companies, served as under secretary of energy at the U.S. Department of Energy (DOE), and held academic leadership positions at institutions such as Johns Hopkins University, Duke University and the University of Colorado at Boulder.

She worked with New York’s Empire State Development to sign industry partnerships in artificial intelligence (IBM), advanced materials (Applied Materials) and silicon carbide integrated circuits (Cree) totaling $4.6 billion with associated academic research programs that helped boost SUNY research expenditures by $100 million year over year. Dr. Johnson also partnered with the New York Power Authority to develop a clean energy roadmap for SUNY, with a goal to procure 100% of its renewable electricity by 2023. During her three years at SUNY, she recommended 18 permanent or interim campus leaders for appointment by the Board of Trustees.

Dr. Johnson previously served as provost and senior vice president for academic affairs at Johns Hopkins, where she led a university-wide strategic planning process, Framework for the Future, that included a focus on significantly advancing cross-disciplinary research, stood up the Carey Business School and launched the MOSAIC Initiative to recruit underrepresented faculty.

As dean of the Pratt School of Engineering at Duke, she helped transform the engineering school into a national leader through the creation of student-faculty research partnerships and a strategic planning process that increased undergraduate enrollment by 20%, doubled the number of graduate students, tripled research expenditures, increased the school’s endowment tenfold, and led to the design and construction of the Fitzpatrick Center for Interdisciplinary Engineering, Medicine and Applied Sciences. Also during her time at Duke, Dr. Johnson worked closely with engineering faculty to increase the percentage of women faculty from 6% to 19%. She hired 55 faculty members, including 19 early-career award winners and three members of the National Academy of Engineering.

During her tenure at the University of Colorado at Boulder, Dr. Johnson co-founded and served as CEO of ColorLink, which focused on innovations in microdisplays and color polarizing technology. The company would become part of RealD, responsible today for the Real3-D system used in more than 300 movies, including “Avatar.” The technology developed by Dr. Johnson and ColorLink was recognized by the National Inventors Hall of Fame and the John Fritz Medal (2008), which is among the most prestigious honors in engineering with past awardees that include Thomas Edison, Guglielmo Marconi and Orville Wright.

As the under secretary of energy at the DOE from 2009 to 2010, Dr. Johnson managed a $10.5 billion energy and environment portfolio, and an additional $37 billion in energy and environment investments from the American Recovery and Reinvestment Act. She also worked with over 100 DOE scientists and engineers to prepare the Strategic Technology Energy Plan (STEP) to reduce carbon emissions by 83% by 2050.

After leaving the DOE, Dr. Johnson co-founded and served as CEO of Cube Hydro Partners, a clean-energy infrastructure company focused on building and operating hydropower plants in North America. During her tenure, the company grew from one to 19 plants, powering 150,000 homes with clean energy in five states. Cube Hydro Partners was sold in October 2019 for $1.12 billion.

Dr. Johnson has published nearly 150 referenced papers and proceedings, and holds more than 100 U.S. and international patents. Along with the John Fritz Medal, her awards include the Dennis Gabor Prize for creativity and innovation in modern optics (1993); the Society of Women Engineers Lifetime Achievement Award (2004); and the Woman of Vision Award for Leadership by the Anita Borg Institute for Women and Technology (2010).

A member of the National Academy of Engineering, the National Inventors Hall of Fame and the National Academy of Inventors, Dr. Johnson is also an inductee of the Women in Technology International Hall of Fame and a fellow of the Optical Society of America, the Institute of Electrical and Electronics Engineers, the International Society for Optical Engineering and the American Association for the Advancement of Science. In 2010, she received the Milton Stewart Award from the Small Business Technology Council.She has been a member of several corporate boards and is currently on the board of directors of Cisco Systems, Inc.

Dr. Johnson earned her BS, MS and PhD in electrical engineering at Stanford University, where she was a varsity athlete in field hockey and founded the club varsity lacrosse team. She was named among the “40 Years of Title IX: 40 Women Who Have Made an Impact” by the Women’s Sports Foundation, ESPNW and Women in Cable Telecommunications. In addition, she has been awarded five honorary degrees.